For those of you who don't know me, that sentence would have been a lot worse a week ago! Thanks to three-hour classes with Senora Blanca every morning, I've made a bit of progress in my ability to communicate here. Even more importantly, she's very open with us and a lot of our time is spent discussing what life is like for her here. She's really sweet and has a very charming personality. It's really exciting to have her open up to us and talk freely about her beliefs, family, and outlook. Although she represents only one person's experience, it's a rare thing to find someone to willing to talk, and the best part is, it's all in Spanish! Muchas gracias, Senora!!
Posted by moira at 11:51 PM No comments: 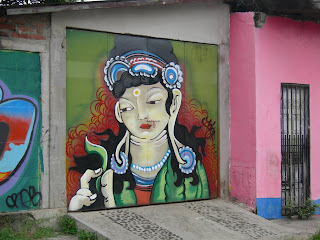 Holy crap! There's sooooooooo much awesome graffiti here. It seems like every spare flat surface is either painted or graffitied...but really well. take this Lady to the left, she's on someone's garage door! Imagine seeing that back in the States!

The visual stimulai of the city as well as all the public artwork is really inspiring. I love the colors of the houses, as well as the art, and I'm excited to sit down and make some new paintings!
Posted by moira at 11:37 PM No comments: 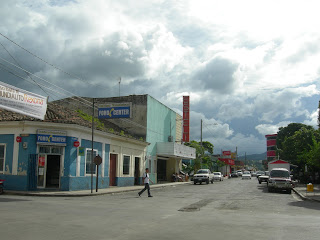 I love the sky in Esteli - it's absolutely stunning. The mountains to the West create a dramatic backdrop to the city itself, and they seem to impact the weather patterns. Sometimes heavy clouds hang over them, like fantastical hands creeping towards the city. This photo faces the west, the direction that weather patterns seem to come from (I blame the mountains!) They really seem like something from a fairy tale to me - I want to explore them!!!
Posted by moira at 11:28 PM 1 comment:

Further on Up the Road

A blanket of smokey fog surrounds the group as we look for an entrance to a bat cave.
Drum Roll....
Posted by Trami Thi at 11:09 PM No comments: 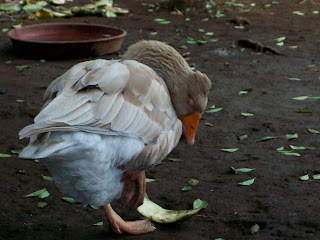 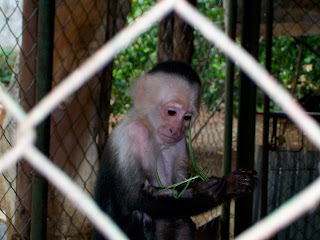 Look at my new pets! Sleepy and Grumpy :)
Posted by rikiesha at 11:04 PM No comments:

I stood in front of a lake filled to the brim with silver liquid. The light reflected on The Lake’s surface does a sensual dance especially for me, a garish display that reveals the true depth of its mystery. Nothing was clearer, as The Lake locked my eye: that moment, a poem was created that would take a thousand years to die. And I stood before the lake, alone before this alluring specter, I wanted more than anything to walk away, to experience the waking morning as I did yesterday, with an absent but satisfied mind. People, newspapers, cars, all become a revolting banality! The Lake did not spare me! The smell of freshness, a blindingly white arena of fog frames my vision. A true tease: This natural and flawless beauty lacked the ability to love any one or anything. Despite all of this, I loved all the more. Black silhouetted mountains line the horizon forever form an eternal embrace with The Lake. Envy fills me. The clouds were in love with it too; for they could not hold their place in the sky, but chose to lie intimately upon the surface, upon the skin, of my beautiful Lake.

An excerpt from my first reflection:
Upon entering the city of Estelí one can feel its character viscerally. Despite our urban setting, lush green mountains remain visible to the east and west. The streets are lined with vibrantly painted homes, and businesses are covered with carefully rendered illustrations advertising the goods sold within. Every surface is like a thoroughly worked canvas, rich with color, pattern and texture. It seems as though the people of Estelí possess an innate sense of color and composition. While I came to Estelí knowing that it is home to a rich community of artists, I had no idea that artistic acuity would be so deeply infused in the culture of its people. Never before have I seen such striking and pervasive visual culture.

For me, the most striking features of this city are the hand painted signs and murals. Text and image are applied directly to the city’s architecture, becoming part of the visual landscape, rather than intruding on it like modern advertising in the United States. I can’t help but picture the skyline of Boston from the upper deck of 93, now cluttered with at least a dozen Clear Channel billboards advertising everything from the local YMCA to Miller Light. Even walking down the street in Boston, and every other city I have traveled to, the landscape is littered with visual communication that is completely at odds with its surroundings. While every surface in Estelí is saturated it is never jarring. As a designer I find this continuity between culture and visual language fascinating. Even logos for modern goods and services have been skillfully translated into this language. Seeing these familiar symbols rendered in this way throws my sense of time and place off kilter. In general Estelí is a fascinating mélange of past and present, where horse drawn wagons plod down streets lined with cyber cafes.

-Kristin
Posted by Art of Solidarity at 10:54 PM No comments:

It's lunch time. Marci (my extraordinary project partner) is out taking a well deserved lunch break and I am sitting in the sweltering Vimau office...blogging. It's more exciting than it sounds. We've been making some real progress on our video about Esteli women despite some stressful setbacks. I'm feeling positive. We're deep into the editing process now, no more filming. In fact we are supposed to share our finished video with the group tonight... I'm hoping for an oscar nomination. I think that's totally doable... how hard could it be?
Back in reality, I'm really proud of what all the groups have been able to do with the short amount of time that we've had to create these videos. We've got four groups working on different topics: Tobacco/cigar production in Esteli, Esteli's historical background its relationship to Esteli today, the lives of women in Esteli, and a documentation of the collaboration between Vimau, the muralist collective, and MICA. I imagine they will all be on the internet at some point. Keep an eye out.
Awesome pictures of our trip to be added later, bye for now.
Posted by Amelia! at 1:03 PM No comments:

A Place You Ought to Know 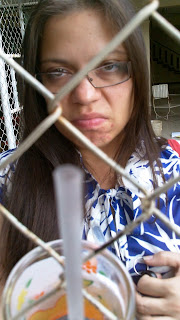 As I walk down the streets of Esteli, Nicaragua past all of the concrete houses, I realize that I am thirsty for some fresh squeezed juice. Lucky me, Nicaragua offers a large variety of freshly grown local fruits at very cheap expense. I think I am in a paradise. Meet Maria Gabriella. Our Fearless Leader. Full of Grace. She is offering me some delicious smoothie of some sort. She is not happy to share. 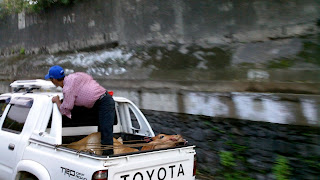 Scenes like these are not something you see anywhere but Nicaragua! As I sit in a tour van, a man zooms by with a cow cozily tucked in the back. Oh, my. 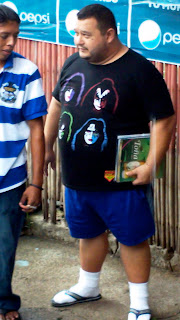 Kiss T-Shirt with Sandel Socks?!
I'm a-makin' new friends everyday. Even with my limited Spanish speaking skills, I find it very easy to make friends with locals. We can't immediately debate politics, but every one is interested in what you have to say. It is a very comfortable and cultivating environment for learning Spanish.
Posted by Trami Thi at 10:48 AM 2 comments: 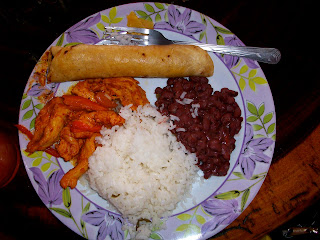 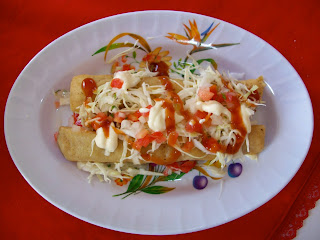 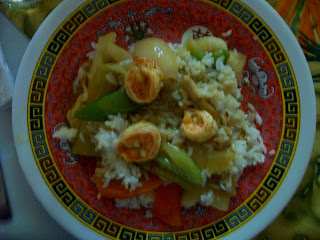 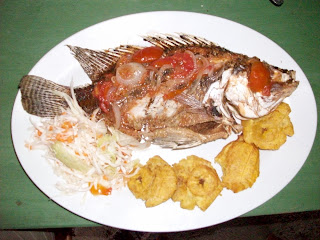 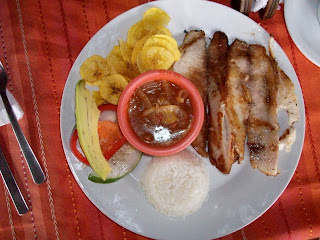 I love taking pictures of my food it is an art for me especially, when the food looks like a beautifully painted picture. Sharing pictures of foods we have been eating here allows you to join in on the meal. As you can see we have been eating very good meals (and for cheap too!) We purchased most of these meals for $1.00. The most we have paid for a meal was probably no more than $5.00. On the trip there are four vegetarians, two people who eats poultry and seafood, and six people who will eat anything (meaning there are some dishes that are not represented here because I only eat certain kinds of foods.) I hope you have enjoyed sharing these meals with us, and I hope that they were just as good to you as they were to us.
Posted by rikiesha at 3:56 PM No comments: 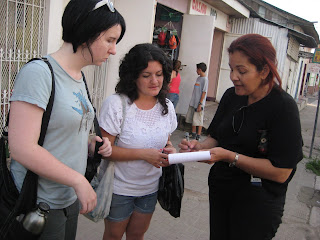 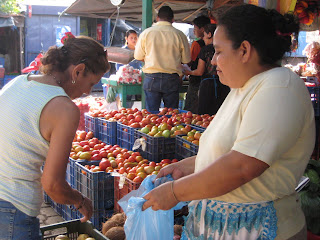 For those of you, like myself, who can't read the title of this post it's supposed to be something like "The Women of Esteli: a video project."

Our group's topic is gender, specifically: what is life like for a woman here?
We've interviewed many women ranging in age and socio-economic backgrounds to learn about the challenges they face, what makes them feel unique, and how this generation of young women differs from previous ones.

My goal is to help create a video that captures the strength and sincerity of all the women we have met and worked with here while addressing economic and cultural issues. It's been difficult to say the least but an amazing learning experience.
Posted by AMV at 12:04 PM 3 comments:

Just wanted to post a quick photo update of some of the awesomeness we have been up to. Feel free to post photos and comments!

Some images from our mural tour with Marco of the Muralist collective, as well as a few images of us all working on our video projects with VIMAU!

Posted by Art of Solidarity at 10:20 AM No comments: