For me, the defining experience of my time in Nicaragua was the premier of our student’s film in Limay. Overall, I felt like working with students was where I experienced the most growth and where I felt like I was able to give the most. I was constantly blown away by the talent and dedication of our team of students. I feel extremely lucky to have gotten the chance to work with Julio, Josué, Jonerling and Emmanuel and see them grow more and more confident in their skills as filmmakers. Whether it was luck, or an innate ability to work together as a team, each student seemed to gravitate towards a different role. This is something that I feel is very much a part of Nicaraguan culture. Beyond just placing the group before the individual, it’s seeing the bigger picture and instinctually knowing your strengths to work towards a common goal. I saw this while working at VIMAU and again while carving stone at the Marmolina studio. It was never about one person. It was about working together to create something that was meant to be shared.

Throughout the filmmaking process I saw this passion and dedication to working together and sharing experiences. Whether it was families inviting us into their homes to shoot, or the many citizens of Limay, including la Policía, who spent hours shooting with us, everyone was always eager to contribute. Some of the most passionate performances in the film were given by random people that were pulled off the street, who , without a script and with little direction gave amazing performances and kept going take after take!
On our last night we premiered our student film at a local dance hall. The crowd erupted as soon as the title reading “Limay, Nicaragua” appeared on screen. I could feel not only the pride of our students, but the pride of the entire audience. The response to this film was really overwhelming. This was the first moment where I understood what our presence in Nicaragua meant to the people there. 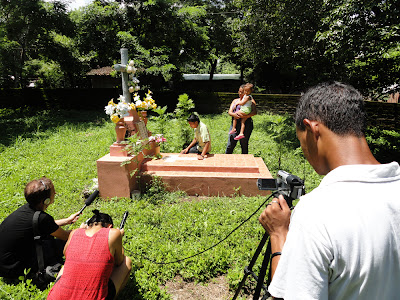 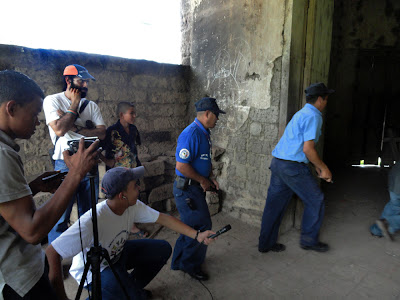 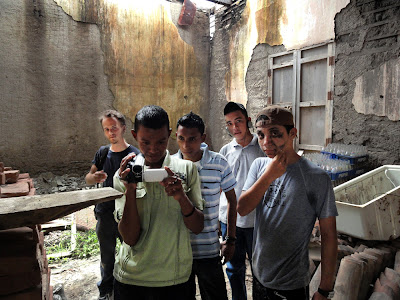 While I can't make it back this summer I would definitely love to return. I've been hassling Josué to keep making movies via Facebook!
xoxoko
Posted by Art of Solidarity at 1:29 PM 2 comments: Links to this post

The Moment That Stays

The trip to Nicaragua provided a lot of “firsts” for me: first trip to Central America, first time painting a mural, first time communicating in Spanish, first trip taken with strangers, first time I was forced to listen to Justin Bieber.... the list goes on. There was beauty, there was drama, epiphanies, dance parties, topless waterfall adventures.
And yet, one of my most fond memories occurs on a rather calm morning in Limay, the rural town where we were teaching art to local teens. It was only the second day of class. The muralism group was divided up amongst us teachers with the goal of going out and taking some reference photos for the murals we were designing. Sounds relatively simple, but in case you forgot, I don’t really speak Spanish that well. I’m not being modest, I had only started learning Spanish about two months before I left for Nicaragua. That’s all fine when you’re in a group-teaching setting, there’s always someone around to translate if necessary. Now I was going out alone with three kids and I was somehow supposed to maintain some kind of authority while being helpful and fun and they’re going to think I’m stupid ohmygodohmygodohmygod!
Alex, Gary, Gema and I walked outside in the late-morning heat. They understood the project – we were looking to capture everyday life in Limay: bicycles, chickens, horses. People working, cooking, living together. And that’s what we did. They would set the scene and I would take the picture. We worked together marvelously.
Alex was older than the other two, a little rebellious, the “cool” one. Gary was a sweetheart, a joker but calm, emanating an assuredness that seemed advanced for his age. Gema (pronounced Hay-ma) was shyer than the boys, but immensely kind and innovative. Like a lot of the Nicaraguans I met, they seemed to be smiling all the time. Their personalities combined with their genuine excitement to be working on this project produced a delightful hour of walking around Limay, wherein we ended up taking a lot of pictures that were later used for the mural.
As we walked back to the youth center to meet up with everyone else, I remember feeling so relaxed, so at ease with these three people that I barely knew and could barely talk to. It was wonderful, it was success, it was bliss, if only for a little while. There would be more work to do, more sources of anxiety, but it’s this moment that holds on, this moment that stays with me.
Posted by Amelia! at 3:21 PM 2 comments: Links to this post